Vaccinations & Immunisation in Malaysia – Prevention is better than cure.

February 7, 2019 by Dr. Kaarthig in Vaccination

Vaccinations & Immunisation in Malaysia – Prevention is better than cure.

In a disturbing trend of previously wiped out deadly infectious diseases coming back to infect humankind, we’re seeing a lot more cases of previously eradicated illnesses diagnosed today. In recent years, we’ve been hearing of child deaths related to obscure sounding diseases, with the most recent being the passing of a 14-month old toddler from diphtheria. Upon investigation, it was discovered that the child was not immunized against this fatal disease.

So here, let’s go over a few salient points about vaccinations. First, we’ll cover why and how they came about, then perhaps we’ll move on the issues surrounding the choice to vaccinate.

Basically, a long time ago, when humanity was less refined and we shared the world with many more species of bugs, we picked up quite a few infections from nature (our immediate surrounding). We quickly started noticing that a lot of these infections were very harmful, deadly even to humankind.

History has shown multiple outbreaks of infectious diseases such as measles, plague and smallpox over the course of a few centuries.

With the advent of drugs like antibiotics then moving to new discoveries in terms of how to grow, culture and kill certain bugs, we developed vaccinations for quite a few infections.

There have been a number of key moments in medical history that impact us till today. The most notable would be Alexander Fleming’s work with antibiotics and bacteria, which is the cornerstone to many of the medications and vaccinations we use today.

The biggest game-changer on a global scale is, of course, the creation and usage of vaccinations against smallpox, measles and polio. These diseases had previously wiped out thousands of people at various points in time.

Have you ever personally seen a person with smallpox? I haven’t, and I’m thankful. If pictures and descriptions in medical texts are anything to go by, smallpox isn’t something you’d wish upon anyone. This highly contagious and debilitating disease was the fear of parents everywhere. With rigorous study into developing and implementing the use of an effective vaccine, we can proudly say that the last known case occurring in 1978 and in 1980, smallpox was declared eradicated.

The first documented measles epidemic took place as early as 1592 AD, and a fair number of similar epidemics devastated populations up to as recently as 2011, in Congo. However, it must be noted that on a global scale, the number of cases recorded is significantly lower than before and in countries with comprehensive vaccination programs, there are less than 20 cases per year.

Iron lungs, administration of oxygen through the legs via electricity, limb lengthening surgeries. These were just a few of the many treatment options to help those unfortunate enough to contract poliomyelitis, commonly known as polio. Recognizing that it would be more humane to work on preventing this horrible disease, extensive work was put into developing a vaccine and it certainly paid off. Currently, 80% of the world’s population live in polio-free regions.

Basically, some geniuses with a passion to save as many lives as possible studied these bacteria and learnt how the human body adapts to these infections and ultimately moves on to kill and therefore protect the body from these infections.

How Some Vaccination Works

Some form of vaccinations are actually a dead or a weakened state of the bacteria being injected into the human body so that we will be able to build an immunity against it and therefore if we are ever exposed to these bacteria, we will not develop the infection associated with it, keeping us and our immediate surroundings safe from harm.

This went on for decades and we saw many detrimental diseases like polio, diphtheria (a whooping cough), measles, smallpox, and to some extent, even flu viruses cases dramatically reducing.

Malaysia has made significant progress in maternal and childcare in this area as well. We were just certified to have successfully eradicated HIV and syphilis transmission from mother to child.

We also have in place policies to eradicate measles by 2019. Currently, we are actively pushing the boundaries to eradicate polio as well here.  We thought we had also won the fight against diphtheria until this news article came about.

Why Are Vaccines Important? 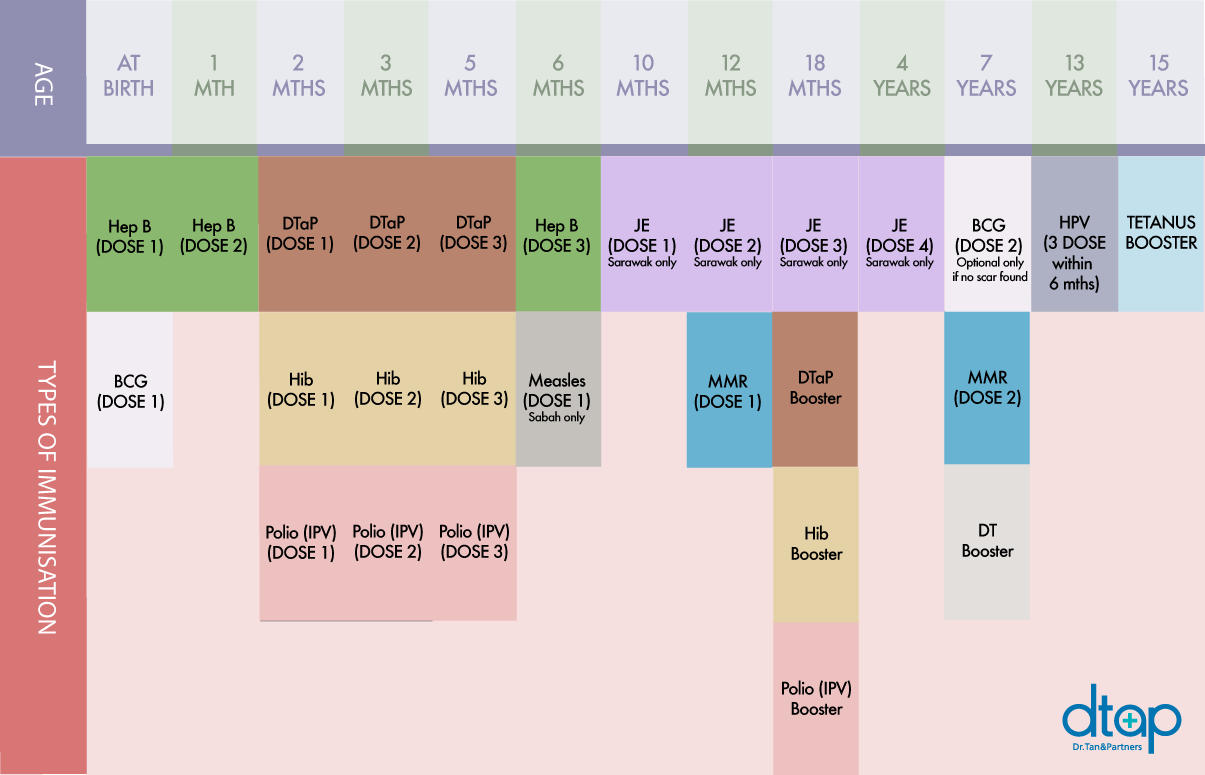 How do I know if I am vaccinated?

As a Malaysian citizen, our healthcare is not lacking when it comes to vaccinating the public. Any child born here will have routine vaccinations as per the above available to them. There will usually be a vaccination book that documents these things.

As we move through the public education system as well there are routine vaccinations made available to us.

If you cannot remember having any of these vaccines especially the newer ones around (such as HPV or MMR), please consult your doctor and we can work on that.

Would I need vaccinations as an Adult?

Healthcare has no age limit. As an adult, there really is not much of a scheduled roster of vaccinations but there are certain instances where you would need further vaccinations.

For instance, while walking on your merry way cutting across the park on your way to work, you get approached by a friendly dog you don’t know but this dog got a bit too friendly and chomped on your shin a bit. Minor injuries, minimum skin is broken, you’re perfectly fine. This is an instance where you should go to your doctor and get your rabies vaccinations done as promptly as possible. Following which, stick to the rabies vaccination dosing to be properly protected against it.  (Read: Rabies Outbreak in Malaysia)

Another example would be if you’re just moving into the culinary arts and industry, you’d need a typhoid vaccination to ensure no foodborne illness are transmitted.

Although measles, mumps and rubella are commonly known as childhood diseases, it doesn’t mean adults are exempt from them, especially since the MMR vaccine wasn’t always in the national immunisation schedule. (*only added to the national immunisation schedule in 2002. previously, measles vaccine was introduced in 1982, and rubella in 1988). This implies that if you cannot remember if you got the vaccines and are born earlier than 1982, it might be worthwhile to get this looked into and perhaps vaccinated.

The Japanese Encephalitis (JE) virus took the Malaysian medical community by storm when it hit in its massive waves in 1974, 1988, and most recently in 2015. This is a virus that can incapacitate the brain leading to serious complications and in some cases, death. The Malaysian Ministry of Health has a well-funded program for the vaccination of JE though and it should be considered for anyone travelling to an endemic area. (this includes farms and organic fields)

This is also an important vaccine that should be considered especially after injuries or contact with rusty surfaces. Tetanus is a severely debilitating disease that is not easy to treat or fully recover from. We recommend booster injections every ten years.

Traveller vaccines are also an important consideration when it comes to getting the vaccination as an adult. Especially if the intended destination is known to be harbouring disease or disease strains that you have not been exposed to prior to that. Case in point, it is compulsory for everyone going to Umrah to receive pneumococcal and meningococcal vaccinations prior to travel.

In an effort to keep the entire species at large safe, vaccinations should be taken very seriously. Wherever available, every person should receive vaccinations as per guideline recommendations or if a situation demands it. Be it for protection of an individual or gaining protection via herd immunity, preventable diseases that carry such a tremendous health impact to us as a species should not be taken lightly.

As we have just discussed, these diseases carry a significant burden not just to us as an individual, but to families, healthcare systems, financial situations and economies of scale are also implicated.

That being said, please drop by your doctor’s and have a chat with them about your vaccination status and health. Remember, prevention is better than cure.

How to test for Early Pregnancy?